Table of Contents
Also known as Breakwater Beach. This beach is commonly used for teaching scuba classes. It's relatively sheltered from waves and swells, has easy entry via a sand channel on the breakwater side, and has close parking, showers, and bathrooms. This is a marine sanctuary, so look but don't take.

This rock wall is on the right (south) side of the beach. Lots of nudibranchs, crabs, and fish; sea lion encounters are common farther out.

It's very hard to get lost, even in low visibility; keep the wall on your right headed out, and on your left headed back.

The numbers painted on the side of the concrete part of the breakwater start at 0 by the stairs and are every 100 feet. Swim out to at least the number 6 on the wall before dropping down; the bottom drops off there from 15 fsw down to 25-30 fsw. You can get down to 50 fsw farther out the base of the rock wall.

There is a sand channel between the rock wall and mid-reef where entry is easiest. Don't get too close to the rock wall during entry or exit; waves can push you into the rocks.

There's a big anchor in the sand channel about 15 yards off of number 5 on the wall, which is occasionally visible when the sand shifts after a big storm.

This is a collection of rock outcroppings in the center of the beach. Most of them are in 15-30 fsw. Training dives often go here. To the north end, there are runs of small pipes.

You can enter the water either in the sand channel at the south side by the rock wall (easiest), or out from the broken concrete building by the ramp (see the big pipe for more info).

There is a large (30" diameter) pipe extending out from the old pump house next to the bathrooms on the right edge of the beach. It varies from all the way above the sand to almost totally buried in sand for about 20 yards just past the smaller pipes. There are some nice rock outcroppings to the north of the pipe midway out next to a tilted concrete mooring block; those are in 35 fsw and accessible to less experienced divers.

Enter at the north end of the beach, out from the broken concrete building. There are many small submerged rocks near shore, so this isn't the best entry point if waves are more than waist high (which fortunately doesn't happen very frequently).

If visibility is good (10'+), you can find the pipe from the surface in shallow water and follow it out, then drop down.

If not, here are some recommended sight lines and headings to help finding the pipe:

Follow the pipe all the way out to the end (45-50 fsw) and go due north, and you'll hit some rock outcroppings with big white metridium anemones in 50-55 fsw. This is a bit of a swim, and recommended for divers who are better on air consumption or diving larger tanks.

Directions from the Bay Area

(or just use Google Maps)

The best spots are the front lot by the grass. If that's full, the upper lot and breakwater lots are also good. Make sure you pay for parking! It's a guaranteed $35 ticket if you don't. Parking is free before 9 am and after 8 pm. I usually just pay $10 for the full-day parking pass. Bring a credit/debit card, or use the mobile app (see signs on the parking machines). The same pass is good on the breakwater and both the lots (but NOT elsewhere in Monterey).

There are two sets of bathrooms:

There is one shower by the stairs on the south side of the beach, and another on the back side of the bathrooms on the breakwater.

There are three dive shops close by, if you need to fill tanks (bring your cert card for nitrox fills) or rent/buy gear.

There's a sausage deli called PigWizard on the breakwater in between the dive shop and the bathrooms. You can walk into the deli in a wetsuit, as long as you're not too drippy.

If you remember the old sandwich shop in that location owned by the Russian couple, it moved in 2015 to 794 Lighthouse Ave (several blocks down towards the aquarium).

Here's a map with features labeled (click for larger image). 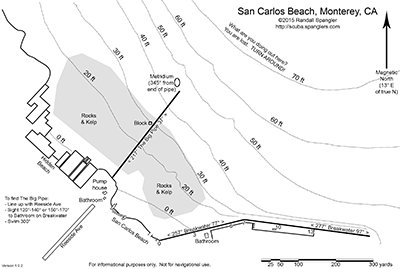 Here's an alternate map made by some of my divemasters in training.

San Carlos Beach is a great place to night dive. A different set of critters comes out of the rock wall at night, and octopus are common in the sand channel next to the rock wall. Occasionally, a seal will dive with you to hunt by your dive lights.

Some things to know:

×
Settings
Or it *will* be settings someday.